“Hats off to Keda Cowling!   You are the Mother Teresa for dyslexics…”

TOE BY TOE – ABOUT US

(from the desk of Frank and Kelsey Cowling)

The first thing to know about Toe By Toe is that it is very much a family concern, and our concern is primarily helping families – children, adolescents and adults – with reading difficulties.

Very much the Star of the Show and the creator of Toe By Toe (and other resources designed to improve reading) is our mother, the remarkable Alkeda Mary Cowling.  Known to friends and colleagues as ‘Keda’ she has spent all her life in the moorland town of Baildon in the North of England where, in her later years, she has made a massive contribution to tackling illiteracy in the UK and overseas.

Keda was born in 1926 in West Yorkshire, attending school during the depression years of the 1930s.  Sadly, like so many other children from poor families of that time, she was denied the chance to take up her scholarship at the local grammar school.  Although forced to leave school early for financial reasons, Keda maintained a love for school and her books.  She never lost this passion or her burning desire to become a teacher. 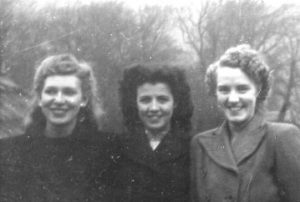 Lunchbreak for the girls at Salts Mill

At the age of 14 Keda became a ‘mill girl’ at the famous Salts Mill, in Saltaire, West Yorkshire. Later, she became part of the Second World War effort making bomb releases for Lancaster bombers.  After the war, she returned to Salts Mill, married and brought up a family. 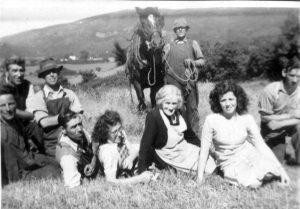 It was not until the mid-60s – after overhearing a conversation on a bus – that Keda realised she could still fulfill her dream of becoming a teacher. She attended night school, passed the necessary exams and enrolled at the nearby Bingley Training College.  Keda finally qualified as a teacher in 1968 at the age of 42.  Despite this late start to her teaching career, she would develop methods which would change the lives of  thousands of struggling readers worldwide.

TOE BY TOE– THE EARLY YEARS 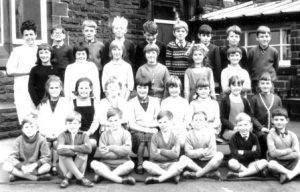 Keda with her first class of students in 1968

Keda spent almost all of her teaching career at one school – Sandal Road Primary School in Baildon, UK.  She also almost exclusively taught just one age group, 6-7 year-olds; the age when most children begin to pick up reading skills.

This was soon to become Keda’s obsession – the teaching of reading.  Initially, she was baffled as to why every year a significant proportion of the children in her classes struggled with basic reading skills.  To Keda, they were just as bright as the other children but – for them – reading remained a mysteriously difficult skill. 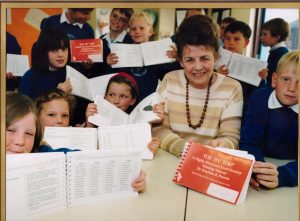 Keda always had a keen and inquisitive mind and this conundrum began to nag at her.  She felt that she had ‘failed’ these children in some way and so she made an offer to their parents.  She asked permission to teach their children at her home – without charge – at the end of the school day. 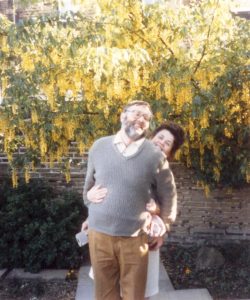 Keda with her husband, Albert

As a consequence, Keda’s house was soon overflowing with struggling readers after school hours.  Keda even designed an extension to her house to include a custom-built classroom and persuaded her doting husband, Albert, to build it.

For the next 30 years, between 4-5 p.m. every school day, Keda’s house – literally, just a stone’s throw away from the school where she worked – was full of children as she methodically searched for ways to improve their reading skills.

At the time Keda began her research into children’s reading problems, few people had even heard of the term ‘dyslexia’.  However, Keda soon became fascinated by the disorder and her private research into dyslexia soon became an all-consuming obsession.  She took a scientific approach by dividing the children into two groups.  A control group where the conventional methods were used, and a group she dubbed her ‘guinea pigs’ where Keda tried anything and everything to see what would make a difference. 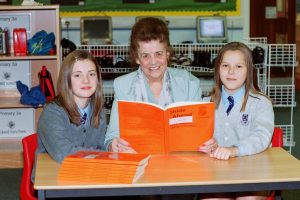 This painstaking process of trial and error became the genesis of what would later come to be known as Toe By Toe.  Keda had no idea what was happening in the psychology departments of universities.  She simply looked at the reading process and pared it down to the essential skills for this ‘reading thing’.  This is also why Toe By Toe is so refreshingly free of jargon and psychological gobbledygook.

It certainly wasn’t a ‘quick fix’ process. Only after decades of this meticulous approach did Toe By Toe eventually become the fully functioning system we have now.  Through all those years, Keda had never planned to publish her literacy work.  Until her retirement when Stan Hinchcliffe, her wonderfully supportive headteacher (and another hero of the Toe By Toe story) exhorted:

“For God’s sake Keda – don’t retire, die and take this with you.  This is important!!”

Stan knew better than anyone what a powerful tool Keda had created because not a single child had left his school for a decade who couldn’t read. ‘Toe By Toe’ got its name after a grateful parent told Keda that she could see how it worked:  “Progress by tiny steps – almost one toe at a time…” 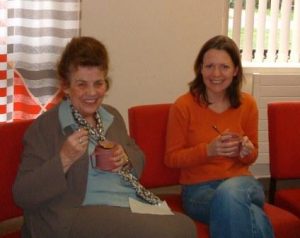 Keda at a meeting of Dyslexia, Ayrshire 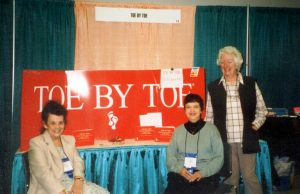 Keda at a dyslexia conference in the USA

THE SUCCESS OF HER LIFE’S WORK

Keda retired from Sandal Road Primary School in 1989.  On Stan’s advice, she used her teacher’s pension to finance Toe By Toe and it was finally published in 1994.  Thankfully, it has become a phenomenal success.  Since publication, Toe By Toe has sold more than 500,000 copies, helping hundreds of thousands of struggling readers, young and old, overcome their difficulties and, as a result, dramatically change their lives for the better.

Keda’s ‘Little Red Book’ has now taught so many to make more sense of the world they live in.  Toe By Toe is used in more than 20,000 schools around the UK and Ireland, as well as gaining converts in more than a hundred different countries all around the world.  This includes primary and secondary schools, Higher Education colleges, basic training institutions, prisons, young offenders’ units and military camps.

Toe By Toe is used in remarkably diverse places and situations worldwide, ranging from Aboriginal prisoners in the deserts of Western Australia, to posh prep schools in the highlands of Kenya, to remote regions of the Yukon in Canada.  It is used in the Falkland Islands in the South Atlantic and the Gilbert Islands in the South Pacific.  Maori school children use it in ‘buddy schemes’ and it is working its magic with ethnic Chinese children in Hong Kong and Singapore.

Truly, Toe By Toe has a global reach and universal appeal. 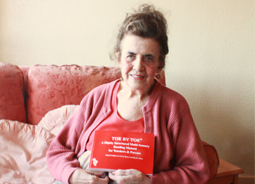 Keda Cowling – creator and author of Toe By Toe

Her sons, Frank and Kelsey Cowling, collaborated with Keda in producing her other published books – Stride Ahead and Stareway to Spelling.

Frank and Kelsey both have considerable teaching experience, both overseas and in the UK.  As well as managing the business, they also continue to teach Toe By Toe, Stride Ahead and Stareway to Spelling in the very same home where Keda began her literacy research more than 45 years ago.

How to find us – Directions to Toe By Toe